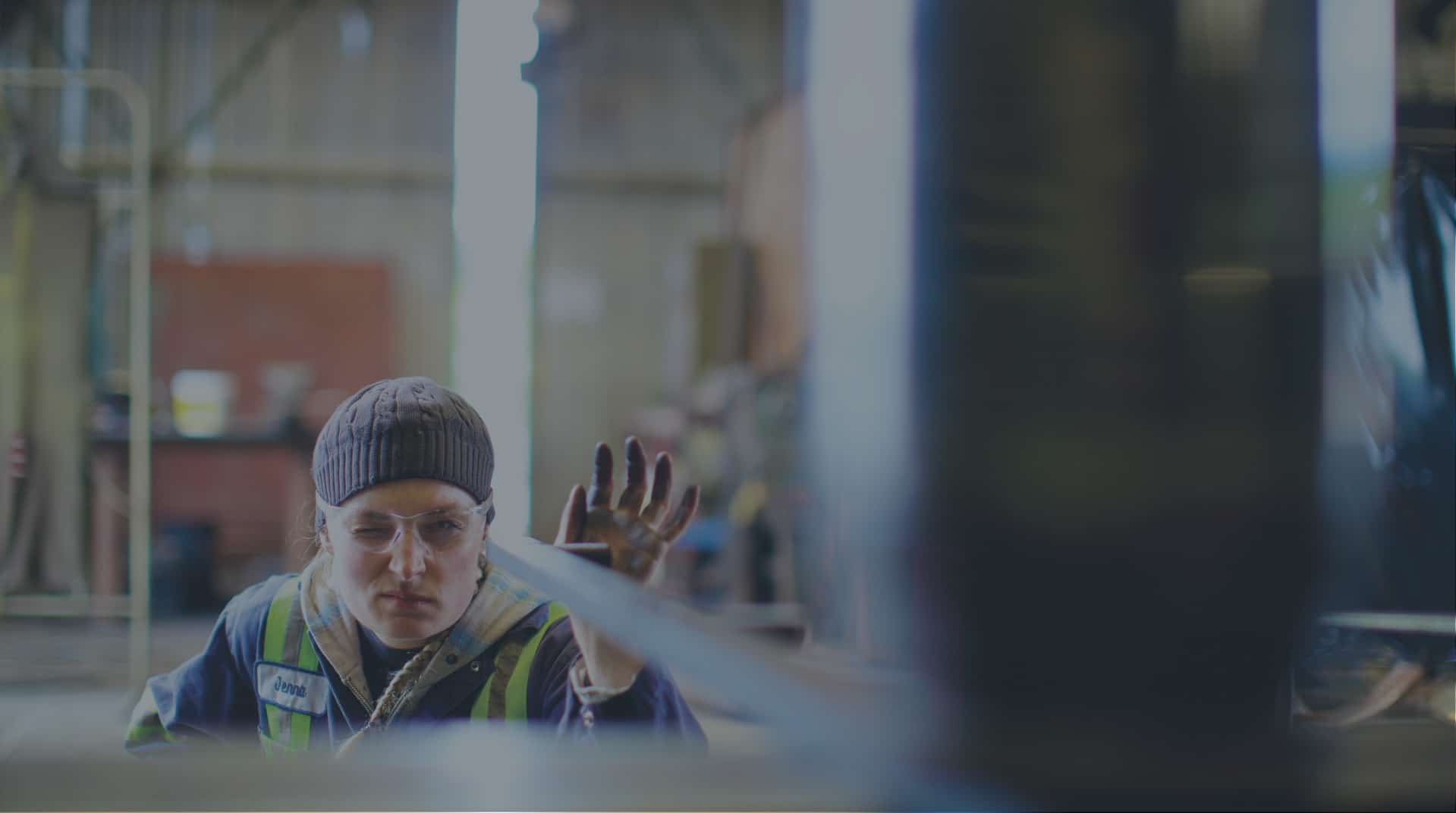 Our blueprint for the future.

Every day, we work to add value and solve problems for industry. Our goal is to offer innovation and exceptional service that decreases downtime and improves operational efficiency. We invest in the latest and best equipment, hire and train highly skilled staff and create a healthy and safe work environment that encourages creativity and initiative. For over 45 years, we’ve kept growing, learning and diversifying our business, and we never intend to stop.

We supply our top-of-the-line brushcutters, grapples and other attachments to independent dealers as well as directly to forestry and road construction companies and government works departments. Our clients and sales partners know that they can count on us to build quality, durable tools and to back up our products with dependable and timely servicing.

We do more than design and build sawmill equipment and parts – we provide solutions that give our customers more uptime and make their operations run better, faster and safer. Our customers trust us to provide top-quality parts as soon as they’re needed and to have a reliable supply chain that won’t let them down.

Our vision is to be a leading technology innovator and problem solver for industry by using our technical skill, engineering ingenuity, facilities and equipment to meet virtually any challenge. We are committed to developing strong, long-lasting relationships with our customers, who rely on us for quick, efficient service and creative problem-solving.

History | A tradition of quality

Promac has a long history on Vancouver Island, having grown out of the amalgamation of machine shops in Duncan, Port Alberni and Campbell River in the 1970s. Over the years, we have built our reputation for quality products and developed expertise in all facets of machining, designing and fabricating. In the early days, we worked almost exclusively with logging and mining businesses, making and repairing parts for the pulp mills, sawmills and logging camps. In the ‘80s, we became specialists in crane parts, eventually opening warehouses in Washington State and Tennessee so we could ship across North America. And in the ‘90s, we invested heavily in our now-renowned line of brushcutters, which have become a major part of our business and are exported worldwide.

Today, our fully integrated teams have the skills and equipment to complete almost any kind of job in-house. From the beginning, Promac has known that you can’t have great products without great people. For 45 years, president Phil Humber recruited and trained the best machinists on Vancouver Island and developed a reputation for customer service second to none. We are proud to say that we have employees who have been part of our history for 20, 30 and even over 40 years, including sales staff who have developed decades-long relationships with customers. Now, president Gary Powers is carrying on the Promac tradition of quality with an even stronger focus on innovation, continuous improvement and the expansion of products and services.

We hire and train the best designers, fabricators and machinists and keep them with us by giving them a safe, healthy and dynamic place to work in the beautiful, family-friendly communities of the Cowichan. We build diversity by encouraging and rewarding innovation and new ideas, because that allows us to be better problem-solvers for our customers. To ensure that every aspect of a job is covered, our technical staff, sales people and managers work as a fully integrated team – because we know that none of us is as smart as all of us. And we understand that, from the shop floor to the office and on the road, listening to our customers is everybody’s business.

Our people care passionately about the products we make. They are inordinately proud of our company’s capabilities and dedication to quality, and appreciate the freedom they are given to think independently and approach jobs in innovative ways. Our journeymen nurture and support our up-and-comers, who in turn bring new ideas and energy to the workplace and discover the satisfaction that comes in being part of a successful team.

Promac is committed to the idea of ‘safety by choice, not by chance,’ and it is our number one priority in all our activities. Not only does this ensure that we keep our employees healthy and unharmed, it also creates higher work satisfaction and increased production efficiency. This is passed on to our customers through more effective processes and improved performance. All workers at Promac are required to not just comply with our Health and Safety Program but to embrace the idea that safety is everyone’s responsibility no matter their position or work area.

As part of our culture of safety, we have set ourselves the goal of obtaining the Occupational Safety Standard of Excellence, recognized industry-wide, by 2018.

With a background in mechanical engineering, project management and entrepreneurship, Gary has the perfect skill set to run a diverse company like Promac. He became owner and president in 2016, pursuing a dream to live and work on Vancouver Island. Previously, he founded and operated eCycle Solutions, an electronics recycling company with outlets across the country. Forward-thinking and innovative, Gary is focused on making Promac the best it can be for both clients and employees.

Scott is a Technologist with over 30 years’ experience in the industry. He first joined Promac as a mechanical designer and draftsperson in 1993, soon working his way up to Head of Manufacturing Services. He became General Manager in 2012 and has been providing reliable and skilled leadership ever since. Scott is a member of the Duncan-Cowichan Chamber of Commerce and currently serves on the board of the Vancouver Island Manufacturing Association.

Vito joined Promac as a Junior Draftsman in 1986 and has been a valued member of our staff ever since. He joined our sales team in the late ‘80s, and started building customer relationships that continue to this day. Since 2000, Vito has been our Sawmill Production Manager, working closely with individual customers, industry suppliers and product developers. As one of his happy customers famously said: “No matter what I need, I just call Vito!”

Dave Carlson comes to Promac with over 30 years of hands-on experience in the sawmill industry, and a goal of passing along his expertise in machining and fabrication to the next leaders in sawmill innovation. Dave is an expert designer who has developed sawmill systems and retrofits for mills across North America, most recently for Rockwell Industries, the successful sawmill manufacturing, machinery and parts company he founded in 2004. In 2017, Rockwell Industries became part of the Promac Group of Companies.

Strategy | Our game plan for growth

Our vision is to be a leading technology innovator and problem solver for industry by using our technical skill, engineering ingenuity, facilities and equipment to meet virtually any challenge. We know how critical up time is for our customer; that’s why we’re committed to delivering on spec, on budget and on time — every time.  Our knowledgeable and experienced team works hard to provide responsive and flexible ‘make it happen’ customer service. Most of all, we take a no-compromise approach to quality and craftsmanship. That’s how we help industry run better, faster and safer.

Continuous Improvement | Our culture of progress

Continuous Improvement is an ongoing process companies use to make a big difference through a series of small changes. Simply put, it involves continually improving our systems to make them more and more efficient. Every step in this process is aimed at improving the customer experience. We evaluate everything we do, then eliminate anything that isn’t of value to our customers. The benefits of this process are huge: our company becomes more efficient; our employees get a safer work environment and increased opportunities for learning; and our customers receive improved products and services designed the way they want them, consistently delivered on time and on budget.

We like dealing with Promac because Matt brings delicious cinnamon buns every once in awhile.

We have been working with Promac more and more since we reopened in 2008 and it has contributed greatly to our success. Their service and quality is the best!

Promac has a diverse range of shop capabilities that is complemented by a solid engineering team. They provide innovative design solutions and efficiently incorporate available materials and resources in their designs. I highly recommend working with Promac on custom fabrication work. They consistently produce good quality products and deliver on time.

I can count on Promac to deliver on-time and on budget. Their sales team offers excellent customer service and is a pleasure to work with.